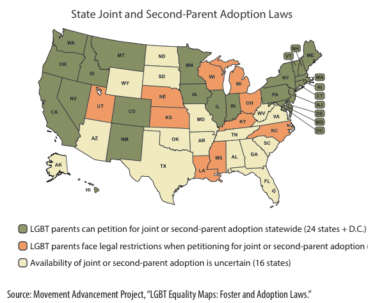 An estimated of 400,000 children in the U.S. have been removed from their homes and are now in foster care, wards of the state. With so many children, the main goal of the foster care system is to find each and every child a home within a reasonable amount of time. If the children’s biological parents have lost their right, finding a home is usually mandated 12-24 months from the removal date, ideally. The main goal of adoption is to find a child a home that is loving and can provide a stable environment for a child to grow up in.

What is the Focus?

Stability, according to the Florida state government means meeting minimum guidelines such as safety, income, education opportunities and a roof over a child’s head. An estimated 1,400 single men and over 13,000 single women made up 1/3 of all the adoptive parents in the U.S. in 2011. Many people feel it is “unhealthy” or “wrong” to allow people in LGBT community to adopt, despite there being a huge number of children needing a home and somebody to love them. Those against LGBT adoption say that children will only grow up “normal” if they are raised by a man and a woman. However, millions of children grow up in single parent homes and divorced homes without having significant problems as adults and with the approval of society accepting that they were raised by one parent. This begs the question: if there are children who need homes, why is there such resistance towards same-sex couples welcoming a child into their home when they have very few other ways of having children?. An estimated 2 million LGBT couples wish to adopt, but because of conservative criticism, have been denied the opportunity to do so.

49 states in the U.S., with the exception of Mississippi, allow LGBT parents to apply for adoption. However, many states require the couple to be married under the law in that particular state, which until recently was illegal and may become harder to do in the future. This means that single men and women are more likely to be allowed to adopt and raise children in the foster system than same-sex households. LGBT households often have two incomes, two parents willing to love and raise a child, and a longing to give a foster child a home where they can feel safe and loved. The idea of adoption is surrounded by meeting the needs of a child and providing a loving home, regardless of the race, background, or even sexual orientation of the potential parent. Therefore, if the focus is the well being of a child without home, why is adoption by LGBT parents a bigger concern than the child’s future? Forgetting that each adoption rejected means a child might miss growing up with a home. 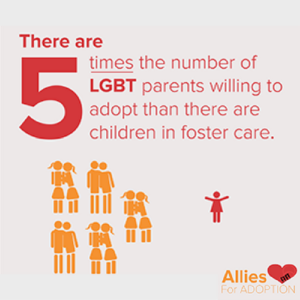 It seems the focus and the point of adoption in the U.S. has been forgotten, impeded by personal beliefs that does not necessarily applicable to everyone. The LGBT community has faced many discriminatory policies and yet, advocacy has led them to pursue equal rights, adoption included. 13 states and Washington D.C. not explicitly allow same sex couples to petition for adoption, because simply allowing any potential parent to petition for adoption still allowed many LGBT parents to fall through the cracks. Private adoption agencies, policy makers, and many birth parents have inhibited LGBT adoption from going through but at the end of the day, part of having equality in this country is giving every potential adopter the chance to apply and subsequently adopt a child who needs them. Several court cases have now set precedence for LGBT couples adopting and have even allowed for LGBT partners to adopt their spouse’s biological children, giving families stability to give their children every opportunity for success. When thinking about LGBT adoption it is important to keep two key principles in mind ahead of personal, political and religious beliefs. The first is that equality in this country cannot come with exceptions, because the very idea of equality encompasses all citizens, regardless of race, ethnicity, sexual identity, sexual orientation, or religion. In the declaration of independence, the second paragraph state “all men are created equal” and many subsequent constitutional amendments have inhibited the government’s ability to treat citizens as anything but equal.

These rights that we are given as citizens include those in the LGBT community, whether all citizens acknowledge this or not. The second and especially important principle in regards to LGBT adoption rights is that every child is entitled to a loving, safe, permanent home. Denying a child that right because many potential adopters are not married, male-female couples, is denying a child potential happiness and success in their future. Each year, 20,000 young people age out of foster care. Of the 400,000 plus children currently in foster care, only 49,866 were adopted in 2011. Over 350,000 children each year need homes and allowing LGBT adopters to fill in these gaps on the basis of love and providing a home rather than discrimination inhibiting these rights is essential to foster care reform in this country. The main focus must be on creating family units for foster children who otherwise will age out of the system and be left without a loving family. No matter how “out of the ordinary” these potential families may be, all families have their quirks, and having a family you can rely on and trust will always outweigh loneliness and abandonment because of discrimination.