Now, I want to start off this second part taking it back. Lets go back to where my whole decision making process started. I know that there are 3 options when you become pregnant: Parenting, Adoption, or Abortion and for me I knew I wanted this baby. I was taught that life began at conception so there was no doubt this baby would come into this world. It was the coolest but most difficult thing that had ever happened to me. It was hard knowing that this was something I could not hide. If you lie or steal it’s a lot easier to hide the evidence, but a baby isn’t something easily hidden. People would eventually see a big belly on me. Now, I’d be lying if I didn’t have those moments of begging God to please take this baby from me. I even hoped for a miscarriage. But, seriously, how could I even say that? How terrible!! I know! There are people that try for years to have a baby and want one and are ready for one but cant have one. How could I even think about a miscarriage! I was so ashamed and embarrassed for thinking that way. It’s very humbling for me even to admit that. Looking back, I am mad at myself for even asking that of God and I am so glad he denied that request. Shame brings out a side of people that can sometimes make a bad situation worse.

Each day I experienced was an internal battle with myself. As soon as I found out I was going to have a little girl I was over the moon. I found myself excited for the first time. I was nervous still but felt that things were looking up. My mind went back to that Hollywood picture. I would be best friends with my daughter, like Rory and Lorelai from Gilmore Girls (even though they weren’t perfect it was still the picture I had in my head). I knew I could do it. I had been baby sitting since I was 11 for kids ranging from little babies to age 13 over the years. I had a pretty good idea of what it was like to have a kid. If anyone could do it I thought I could. All I was missing was a support team because the reality is, it takes a village to raise a child! 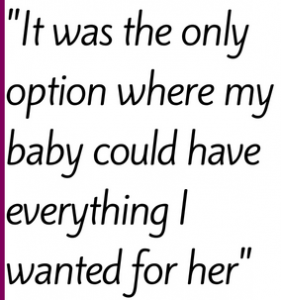 I so badly wanted to be this little girl’s momma and love her for the rest of her life. There was a still an issue though, I did not want to marry the father and I did not want to share her and have her living life with two different families. I thought about moving across the country to take her far away so that if her dad wanted to see her he would have to come to her until she was 18. (was it selfish?) However, that was kind of ridiculous and wasn’t logical from the stand point of all the medical attention having a baby takes with doctors appointments for all prenatal visits and then insurance and so on. I had no clue what to do. I was about 5 months pregnant when my mom finally came to visit me. She sat me down and talked with me. She asked me for pen and paper, and basically made me talk through my choices while writing things out and making little notes and pictures. We were back to the three options like I had in the beginning. I could marry the father and be a family. I already made up my mind that wasn’t going to happen. I had considered it and he even suggested it several times but I didn’t see us in a loving marriage. I was thinking, why make a hard situation harder? So, we crossed that off the list. Next option was being a single mom; Which was what I wanted. We made a time line, a budget estimate and talked through what it would be like. It was like a punch in the gut thinking about the reality of being a single mom. I didn’t think it was the best option for either of us. So, last was the choice for adoption. It became clear it was the only option where my baby could have everything I wanted for her and it was the better choice not only for her but for me as well.

Another issue I had was that I was unsure about where I was going to go next. My lease was ending and I wanted to move home with my mom and just comfortably make all these decisions but she felt like she was not the best of help. She told me when my dad got sick they were advised to take him somewhere that could treat him for everything in one place and all with the help he needed was brought to him instead of him going around to so many places. After checking several different places we found a place in Tequesta, Florida. It was called Hannah’s Home. They allowed me to come in for an interview. I was so scared. I did not want to move into a house full of strangers and be away from my family. They were a maternity home that informed you about the path of adoption, or they were there to help you parent your child. I had to talk to them and tell them about myself, even write an essay! They told me they would pray about it and get back to me. They were Christian-based which was a positive for me too. For as much as I didn’t want to move in I was even more scared of them not accepting me. In the meantime I went back to Alabama and was in one of my dearest friend’s wedding. I also spent some time lying by the pool with another close friend. We would talk about baby names, how to avoid running into the father, and praying for something good to come from all this.

Eventually, Hannah’s Home called and accepted me into their program. I knew I had to sit down with the father because he hadn’t given me too much trouble all along and if one thing was certain, it was that we respected each other. We knew we weren’t going to be together through all of it but I tried to keep him a part of the process for our child. I told him I was moving to a place where I could have the support and help that I needed, and that I was mostly doing it for my mom. She had had enough to deal with in her lifetime already. All he wanted was to stay in the loop through it all. So, I packed up. We had some volunteers come load up a truck and stick it in a storage unit. Then off to Florida I went.

I was welcomed with open arms and only one other resident was living there at the time. I got started on goals and what I want to do while living there. Most of the girls work on their GED and work part time. I already had some college under my belt and was too far along in my pregnancy to get a job but I could still do volunteer work. I really just wanted to focus on the adoption process though, I didn’t really know what else to do with my time. I started with necessities by: switching insurances, finding a doctor, and they helped me by setting up an appointment with an adoption attorney. 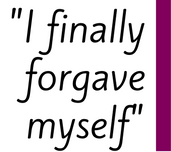 I was still a little unsure about the whole adoption thing but, I started the process anyways. I met with the adoption attorney. She was so feisty like I imagined a lawyer to be, helping me understand the legal side of things and explained the whole process with such love and compassion. We started looking at families right off the bat. I wanted to give someone their first child because she was my first child and I wanted to start a family for someone who couldn’t. I wanted her to be in a family like mine, a Christian home and a fun one at that. I loved looking at all these people and reading about them. However, No one was giving me that feeling I was looking for. I had this idea of when saying yes to the dress (wedding dress that is); I felt I should feel that yes moment. I’ve never bought a wedding dress before but I watched the show, and I knew the feeling I was looking for so I continued to pray. Every day I would have so much time to be working on what would have been class time so I chose to study the Bible. For me I felt Jesus had the answers and I wanted to find them. I had always made my life to look like it was so perfect and put together that even in my deepest darkest moments I couldn’t let anyone see how much I was struggling. In my studies though I found something that changed me. It was a little extra on the passage. It was about Eve. It said “Eve began as the purest, loveliest woman on earth….” Then it goes on to say “For all that she had, Satan was able to convince her that it wasn’t enough” WOW did that rock my world. God formed Eve from man. She was the second person God ever made and Satan had convinced her to stumble and fall.

Everything changed. I finally forgave myself. I knew God had forgiven me already and my family did too. I had missed the part of forgiving myself though. Life became so much sweeter. I was enjoying my pregnancy and learning to enjoy the people around me. I was finally at a place where adoption was the best choice for me and my daughter, and I was excited about it. The only problem was I was running out of time and still hadn’t chosen a family. Of course I wouldn’t leave my baby on a door step if she came before I found a family, so I kept praying. Elizabeth, the attorney, called and said she thought she had found the perfect fit for me. She wanted to bring by two more families for me to look at. I was so nervous and a little confused. Was she meaning to psych me out on picking this family or was she right? She showed me an amazing couple from California. They were just what I was looking for. They had the ideal life I would want for not only my little girl, but I would want. They were financially stable, traveled, beautiful, adventurous but something was not clicking in my heart. The next book contained a family with three kids already. They lived in the state and had a simple but full life. When I looked at them I felt like I already knew them. They just seemed normal and like someone my family would get along with. They were not what I thought I wanted but there was just something I couldn’t shake about them. It didn’t matter to me if they had financial security, that they would travel the world, give every nice thing to my baby I couldn’t. They just looked like I could trust them to raise my baby and love her just as I could. After a lot of prayers and talks about them I decided I wanted to meet them. Finally my first decision had been made!