With the start of a new school year, there can be worries that your child may be bullied. It’s not a thought that goes through every parent’s mind, however, it’s important to be aware that there’s a possibility of bullying occurring at school.

A child can be bullied at any moment no matter the circumstance. However, children who are visibly different, are part of a certain group (LGBTQ youth, a child with a disability, race, etc.) or may be socially isolated are common risk factors for a bully to begin picking on them.

There is no exact reason or methodology a bully uses to choose their “victims.” Sometimes it can just be that the bully likes seeing whose buttons they can push and they will continue to push those buttons if they see that it upsets the other person.

It’s important to address bullying with your child. Even if you think they won’t ever be bullied. Talk to your child about why bullying is wrong. Let them know that if they see it happening they should let an adult know or say something that will put an end to the bullying.

Children are easily influenced by their peers so it’s important to tell your child that they should not blindly follow their friends. Especially if they are doing something that is knowingly bad or at the very least feels bad.

Some children may think that they have things under control and every once in awhile they do make fun of a classmate or laugh when that classmate is being picked on. But as mentioned it’s important to talk to them and let them know that although things may never get as heated, their words or laughing along to the joke can hurt the child who is being picked on.

There are some visible warning signs to pay attention to figure out if your child is being bullied or is bullying another classmate. Typically, children who are bullied will try to brush it off by following along and laugh at the bully’s joke, too. Or they will try their best to ignore the bully and their comment.

Most of the time, the child will not let an adult know about the bullying. So it’s important to also talk with your child, ask them questions- let them know that they can confide in you in any problems they may have in life. Building a bond and foundation of trust with your child will make them feel more comfortable in speaking about their problems.

Visible signs that your child is being bullied is if they come home looking and feeling down all the time. If you see dramatic changes, mood swings, loss of appetite, if they are always feeling sick, and if they begin an irregular sleep pattern. Of course, there are more signs, but those are just a few.

Signs that your child may be the one bullying are if they are increasingly aggressive, are competitive in an unhealthy manner, get into physical and verbal fights frequently, and/or don’t accept responsibility for their actions. 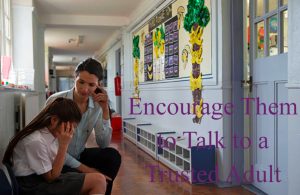 Bullying is an increasingly relevant topic, with more than one out of every five students reporting bullying in 2016. And with 64 percent of children not reporting their bullying and 36 percent reporting the bullying, it’s important that as a parent you talk to your children about the issue.

Bullying may come off as kids being kids, but at a certain point, it can cross a major line. It can lead children to become depressed and deal with anxiety issues. It can also lead to suicide or them hurting others because of the pain they had to endure. Bullying is not something that parents or teachers should take lightly, it’s a serious issue and should at all times be taken seriously.

If you think your child may be dealing with bullying talk to them. If your child is not opening up to you taking them to see a therapist can also help. Talking about their problems with a stranger can be easier for them and it can help them open up more easily than it would to talk to a person they know.

Talk to your child before the start of school and let them that you are there for them and if they ever feel bullied or see bullying happen to tell an adult who can resolve the issue.